[Episcopal News Service] Baking and binge-watching television have both been pandemic diversions. The clergy and lay leaders of St. Stephen’s Episcopal Church capitalized on these habits during the last Epiphany when they produced â€œThe Great Episcopal Baking Showâ€, echoing the hugely popular â€œGreat British Baking Showâ€.

The idea came during a Zoom staff meeting in mid-December 2020 at St. Stephen’s Episcopal Church as attendees wondered “how do we bring people together when we’re not going to be in person this Christmas.” ? ” explained Andrea McKellar, who at the time was the digital ministry coordinator in her parish in downtown Charleston, South Carolina.

â€œWe are a very large congregation with a small space, so there was no way to safely gather together without excluding people,â€ she said, adding that members had not returned to services. in person before May 2021.

The baking was such a hit with the congregation that, although there is no current plan for a â€œsecond season,â€ parishioners still say how wonderful it was to see their leaders in a different context. . McKellar said St. Stephen’s effort for 2020 could be replicated by other congregations for this upcoming Epiphany, or for Mardi Gras, which falls on March 1, 2022.

McKellar, who is also a South Carolina Diocesan Ministry developer and a member of the Episcopal Church’s Executive Council, said the project snowballed after Reverend Laura Rezac, associate rector, suggested a competition for pastry shop. The finished product was a 12-minute video, which McKellar edited and shared on the church’s YouTube channel where the ward still posts Sunday services.

Choice of bakers centered on one main criterion. â€œWe had to make sure we had people who weren’t afraid to make fun of themselves,â€ she said. 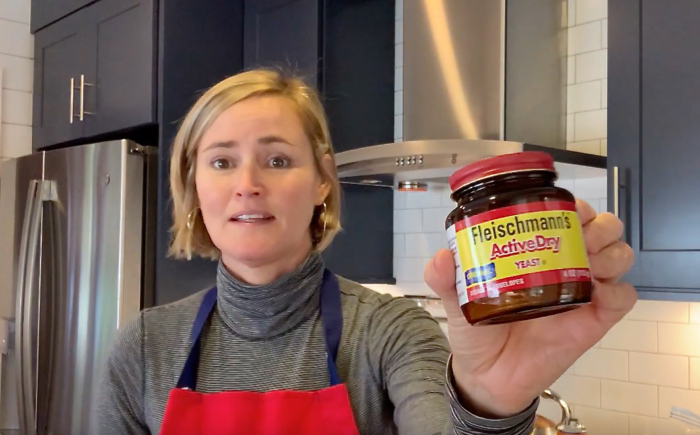 For the competition, the organizers recruited Cynthia Held, member of the sacristy; the Reverend Adam Shoemaker, Rector of St. Stephen; and Reverend Greg Smith, Deacon of St. Stephen, but gave them little information on what they were going to do. Fortunately, none was a baker.

â€œWe didn’t expect these to be people with no baking experience, but it ended up making things more fun,â€ McKellar said.

McKellar and the Reverend Courtney Davis-Shoemaker, deputy rector at St. Stephen’s, suggested a list of ingredients to have on hand. Davis-Shoemaker, who is married to the rector, laid a bag in front of each baker’s house that included a crown, bishop’s apron, the king’s cake recipe, a plastic baby to put in the cake, colorful frosting, and glitter sugar.

The bakers had four hours and could phone a friend and search the Internet. Shoemaker called a parishioner to ask him to borrow his stand mixer, and he took to the internet to find a video about braiding dough. â€œIt was extremely difficult to reproduce what the video asked me to do,â€ he said.

Held also struggled with the braiding, but that wasn’t all. â€œThe hardest part for me was trusting the yeast and the dough rising,â€ she said. “I had no idea if he was doing his thing.” 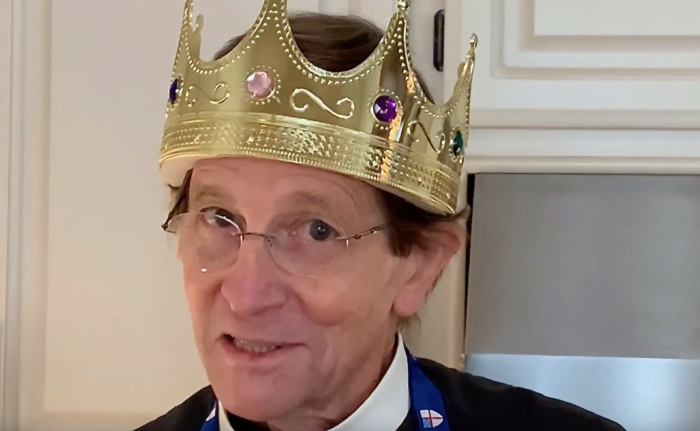 Noting that he gathered all but one of the ingredients, Reverend Greg Smith, Deacon of St. Stephen, said the only thing missing was experience. â€œI have never cooked anything in my life,â€ he said. Screenshot: Video of St. Stephen’s Episcopal Church

Meanwhile, Smith said he found it difficult to just follow the recipe’s directions. â€œHaving never cooked anything in my life, I was definitely out of my comfort zone,â€ he said, adding that he must have searched for cooking terms on Google.

The organizers kept the video part easy, the “film crews” were simply told to use their cell phones and record horizontally, to minimize background noise and to pause before speaking to give the video editor McKellar the ability to stitch their clips. Held said his children made up his film crew and found their task easy. Smith’s wife “held the camera and made fun of me throughout the shoot,” he said.

During the video, Shoemaker takes a break from cooking to briefly speak to viewers about Epiphany. â€œWe wanted this to be a training activity for the church in the midst of fun,â€ McKellar said, adding that the producers were aiming â€œfor training and fellowship in a creative way.â€ 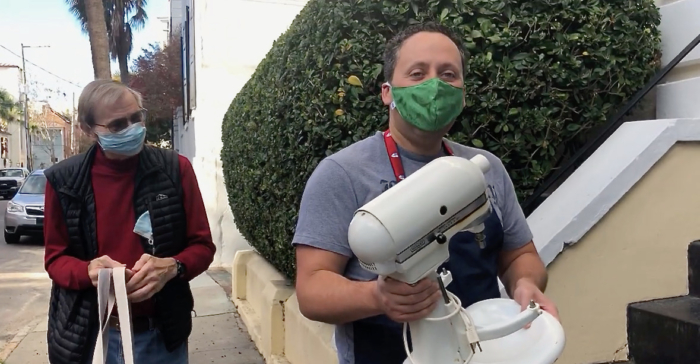 The Reverend Adam Shoemaker, Rector of St. Stephen, used his only phone call to ask parishioners Rich and Jane Clary if they would lend him their stand mixer. Rich delivered it to Shoemaker. Screenshot: Video of St. Stephen’s Episcopal Church

The competition was held under the rubric of COVID-19 security protocols. The bakers cooked in their home while family members filmed them. The judges collected their cakes from tables placed outside the church and brought them home for their role in the contest, which family members recorded. A judge, Dr Scott Curry, is an epidemiologist, one of two in the ward, so “we’ve had medical consultants on this project,” McKellar said with a smile.

The other judges were the Rt. The Rev. Charlie vonRosenberg, former Bishop of the Diocese of East Tennessee and former Provisional Bishop of South Carolina, and his wife and Annie vonRosenberg, Orchard Mike Shewan, and parishioners Thelma Shine and Edna Monroe

The videographers uploaded their clips to Dropbox. McKellar watched episodes of the UK version with an eye on the narrative of each cooking. She used Open Shot, a free open source video editing software, and created other necessary graphics with Canva. The royalty-free music came from Fesliyan Studios.

Parishioners are still talking about the contest and the video, according to Smith. It was the right thing to do, he added. â€œOur parish needed something to bring us fun and togetherness during our time of COVID isolation,â€ he said.

Reports kept “I always get kudos.”

Other bakers and non-bakers in the parish were inspired to try their hand at king’s cake after viewing the video.

However, none of the competitive bakers have baked since. Shoemaker said he could try baking another royal cake with his kids this year “if only to make our family laugh while watching me try braiding again!”

Smith said his wife Lyn “wanted me to quit while I was early.”

It’s not too late for Epiphany 2022. The bakers and judges of St. Stephen’s played their part for three days during the week between Christmas and New Years. â€œI probably spent 30 hours editing because there was so much footage to work with,â€ McKellar said. “And we knew if it was more than 15 minutes, people wouldn’t be watching.”

Shoemaker said his advice to any other congregation considering such a competition is to remember that “there were a lot of films that we ended up not using in the final video.” He said McKellar was a masterful editor.

â€œFor other congregations that want to try this, I would say keep in mind how long it will take to assemble the supplies, do the baking / recording, and then edit everything into a finished product,â€ a- he declared.

Members of St. Stephen’s are not calling for a contest in 2021, in part because the ward is now back in the church. McKellar said, â€œThe feedback we get from people is that they are fed up with the video, but something like that, it’s short and fun, I think people would watch. “

– The Reverend Mary Frances Schjonberg retired in July 2019 as editor and reporter for Episcopal News Service.