A worker from a small sago palm estate in Mukah arranges the cleaned trunks of “rumbia”, which would undergo the grating process to extract the starch. – Photos courtesy of CRAUN Research

THE great diversity of plants in Malaysia offers many opportunities for the discovery of new functional ingredients for “supercharged” foods and beverages.

According to Associate Professor Dr Shahrul Razid Sarbini of the Bintulu Campus of Universiti Putra Malaysia (UPM), the term “supercharged” refers to the “improved quality” of a food or drink after the addition of any functional ingredient.

Explaining this background, he said the “functional food” market emerged in Japan in the 1980s as a result of his government’s plan to improve the health of the country’s aging population.

In addition, he said the term “functional food” appeared in an article titled “Japan Explores the Line between Food and Medicine”, which was published in the international science weekly “Nature” on July 15. 1993 (https: // rdcu.be/cxjew).

“From that point on, the Japanese entered the functional food industry by labeling products such as FOSHU (Foods for Specified Health Purposes),” said Dr Shahrul. Sunday post, adding that in the current market, this specific industry is believed to hold a market demand worth US $ 258.8 billion (over RM1,000 billion). 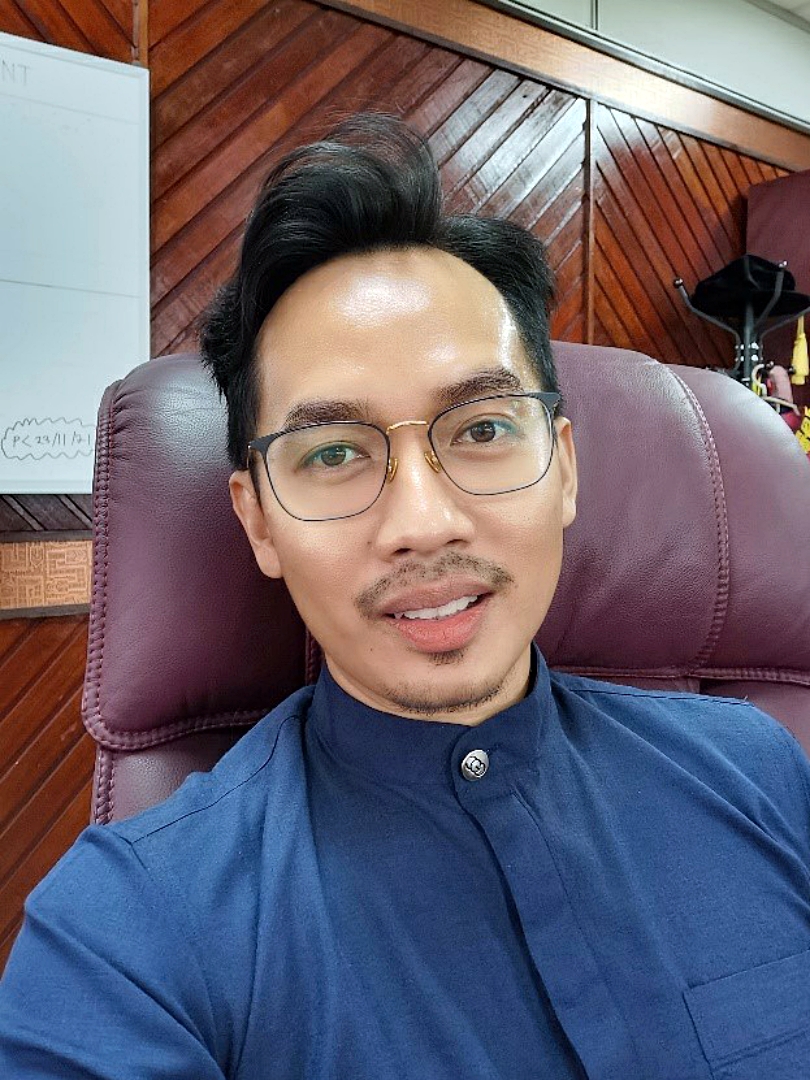 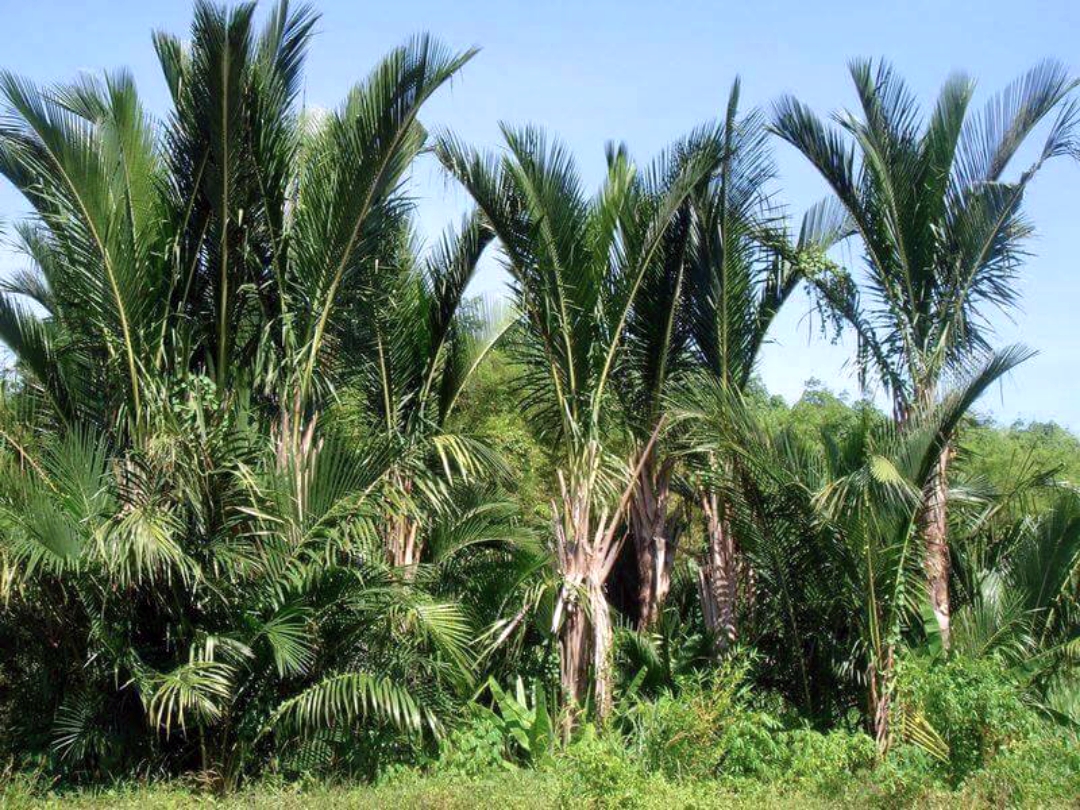 The sago extracted from these palms is a commodity from Sarawak which is exported to Japan, Europe and the United States in its raw starch form.

According to the researcher, there is a “growing thirst” in the market for the functional drink segment, which also covers “supercharged” drinks made up of “traditionally functional drinks made even more functional through fortification with scientific ingredients such as herbs, probiotics and prebiotics ”.

“Prebiotics are among the most common ingredients; other examples include fructooligosaccharide (FOS), galactooligosaccharide (GOS) and inulin, which are now found in abundance in infant formula, ”he said, noting that these ingredients were mostly of Western origin, but his research had uncovered a primary source of the same fiber.

“Sago (Metroxylon sagu) is a perfect example of an underutilized crop that is ‘a source of hidden wealth’ and research indicates that sago starch is a potential source of prebiotics,” said Dr Shahrul, director of UPM Bintulu.

The research group led by him, which also consisted of Siti Aisyah Mohd Zaman and Awang Zulfikar Rizal Awang Seruji of CRAUN Research Sdn Bhd, filed a patent for a new method of modification aimed at improving the nutritional profile of starch by as prebiotics.

“The product, which can be applied in food or drink, has been the subject of in vivo studies in animals (mice), demonstrating potential to combat obesity and improve gut health through increased beneficial microbiota, ”he added.

Dr Shahrul’s team also participated in the Malaysia Technological Expo (MTE) in March this year, where they won the “Merit Award”.
“This collaborative research is just the tip of the iceberg of our innovative potential in functional foods. 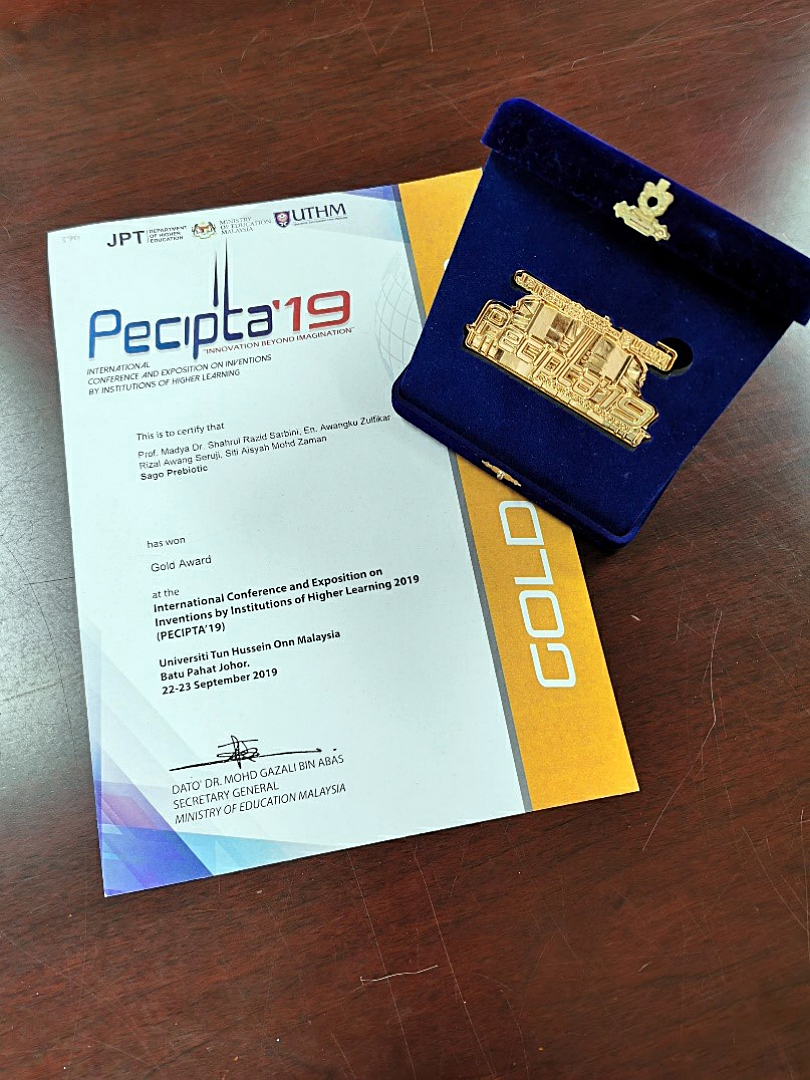 The photo shows the Gold Award and its certificate of recognition given to Dr Shahrul’s team at PECIPTA 2019 for their patented product. 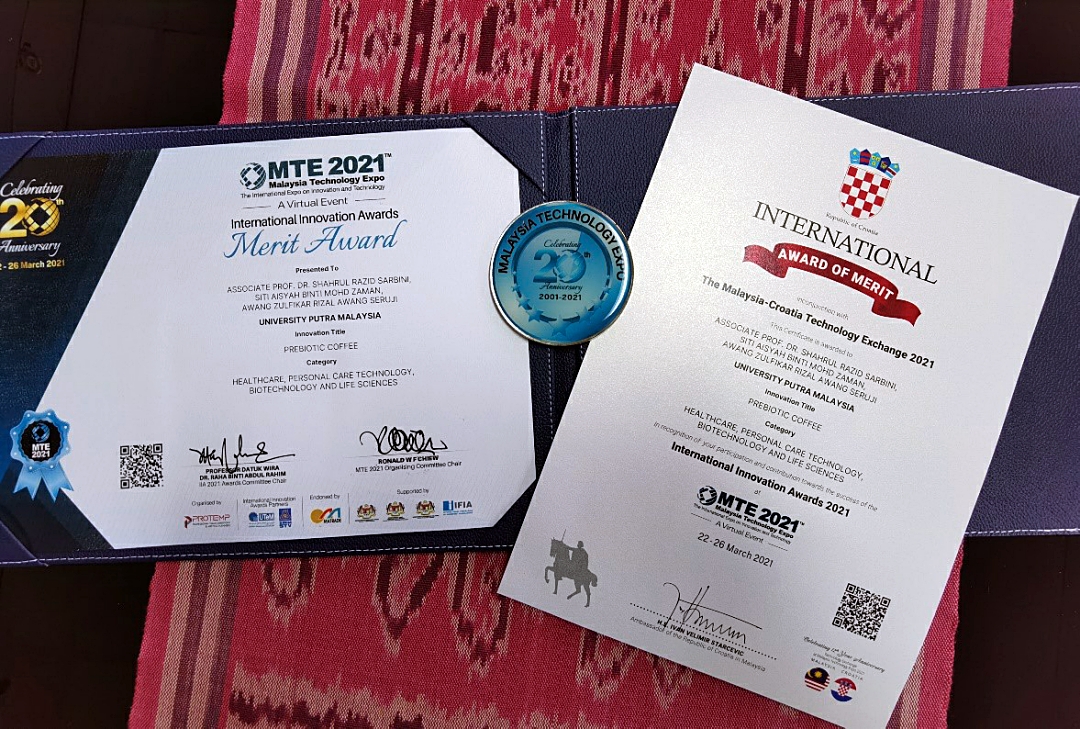 Photo shows “Award of Merit” received by Dr Shahrul’s team at MTE 2021 for the sago prebiotic.

“The mega biodiversity of our country could reveal more possibilities that could be used in a sustainable way for the benefit of humanity.

“We should review our underutilized crops, which are abundant and readily available, as potential sources of functional ingredients for food and drink,” he said.

Learn more about the sago prebiotic 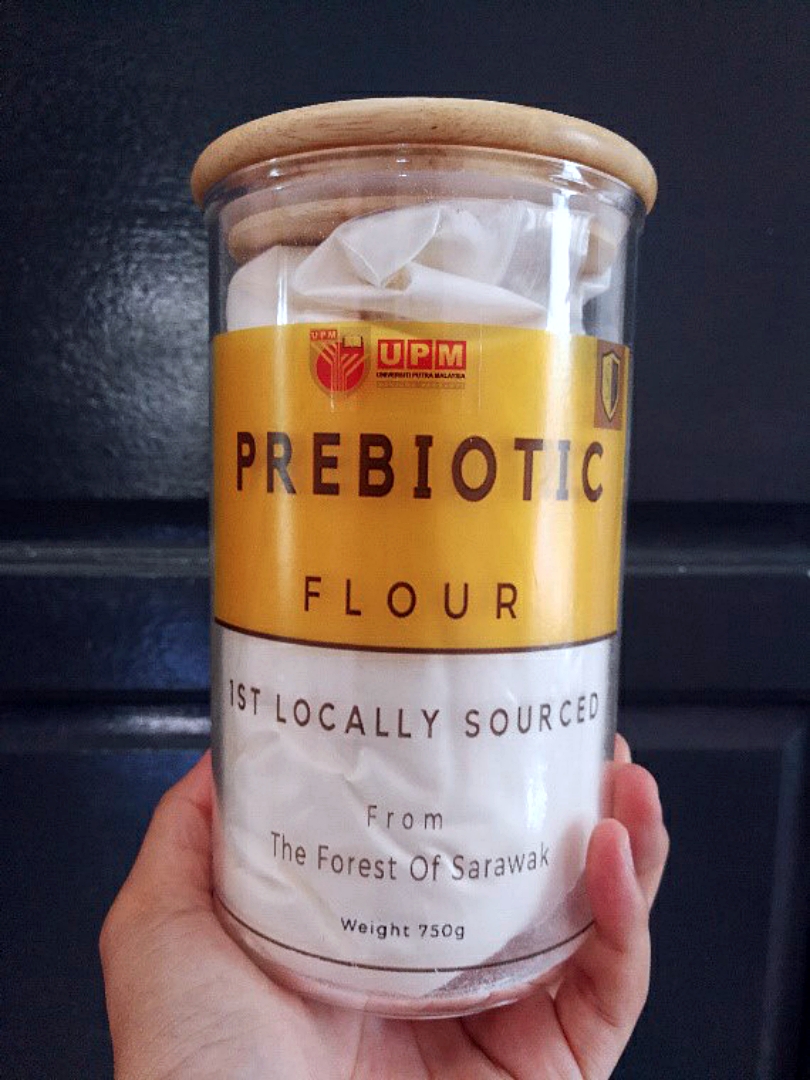 The photo shows a jar containing a sago prebiotic, with labeling saying “first locally sourced from the Sarawak forest”.

According to Dr. Shahrul, sago prebiotic is a functional food, developed by slightly modifying sago starch based on a method approved by the United States Food and Drug Administration (FDA).

“In preclinical testing in collaboration with the Malaysian Institute for Medical Research, we found that the sago prebiotic could increase the (number of) good bacteria and reduce the bad bacteria in our gut – an effect somewhat similar to that of some well-known cultivated drinks, ”he said.

In addition to being used in drinks, Dr Shahrul said that the sago prebiotic, due to its powdered form, could be incorporated into many foods, both local and international, such as breads, ‘roti canai And the noodles.

Nevertheless, he also pointed out in Sarawak, the cultivation of sago palms – or “rumbia”, as they are called locally – is still very much practiced in an unplanted setting, adding that farmers – or more precisely, small operators – are in fact those with the most shareholding in this sector.

“These figures show the effect of the growing sago market, which has a major impact on farmers.

“Our product, prebiotic sago, is a way to increase demand and energize the market.

“This sago prebiotic is the very first locally sourced prebiotic where other similar ones on the market come from the western region,” added Dr Shahrul.

The participation of sago prebiotic in the prebiotics market in 2020 was valued at US $ 8.95 billion (over RM 37 billion) and, in this regard, the researcher was convinced that it would have a positive impact on farmers. sago premises.

Herbs are strong candidates as potential functional ingredients for beverages.

In this regard, Dr Shahrul acknowledged that in Malaysia, varieties such as ‘Tongkat Ali’ (Eurycoma longifolia) and ‘Kacip Fatimah’ (Labisia pumila Benth) had long been incorporated into preparations of coffee, tea and coffee. ‘other drinks.

“Other herbs like ‘pegaga’ (Centella asiatica) and ginkgo leaf, both rich in antioxidants, have been widely marketed as having great health benefits.”

Additionally, he said the spices had also caught the attention of a group of niche consumers looking for depth in coffee and tea flavors, noting that cinnamon was among the most popular.

“It seems that some brands of coffee are also following in the footsteps of those that offer probiotics, which are essentially milk with the incorporation of living microorganisms.”

‘To nourish and sublimate’

According to Dr. Shahrul, one way to maintain a healthy diet is to consume functional foods, which go beyond providing nutrients and energy to the body; in addition, it can also be used to modulate and improve certain physiological responses.

A recent Kerry Group article, he said, highlighted the demand on “the functional drinks segment under the functional food umbrella”.

“Demand is primarily driven by growing consumer interest in the modulation of immunity through (the consumption of) nutritional drinks.

“Drinks are often the engine of innovation, as consumers are more likely to experiment with drinks than with food. “

In light of this, Dr Shahrul felt that the functional drink industry could also act as an advocate for functional foods.

“Slightly different from the diverse functional food market, the functional drink market appears to target traditionally functional drinks,” he said, observing that such a trend is even more apparent in the current climate, where the Covid pandemic -19 made people become more health conscious.

Dr Shahrul believed many had taken a more active approach to controlling what they could to reduce the risk of catching the coronavirus.

“Social distancing is always a must, but exercise and practicing healthy eating habits are seen as additional armor.

“Malaysians even made the news when they dominated global polls on the highest likelihood of reporting weight loss during the Covid-19 pandemic,” he said.

Among those interviewed in this survey, Malaysians believed weight loss would lead to reduced risk of Covid-19, he said.

“It’s true, as the United States Center for Disease Control (USCDC) reported, where obesity-related conditions could worsen the effects of Covid-19 infection.

“The United Nations (UN) had published a report on obesity multiplying by seven the risk of serious infection with Covid-19.

“This further supports the case which calls for lifestyle changes, whether it be exercise or a healthier diet, in the battle against Covid-19.”

For any inquiries on the sago prebiotic, Dr Shahrul can be contacted via [email protected] 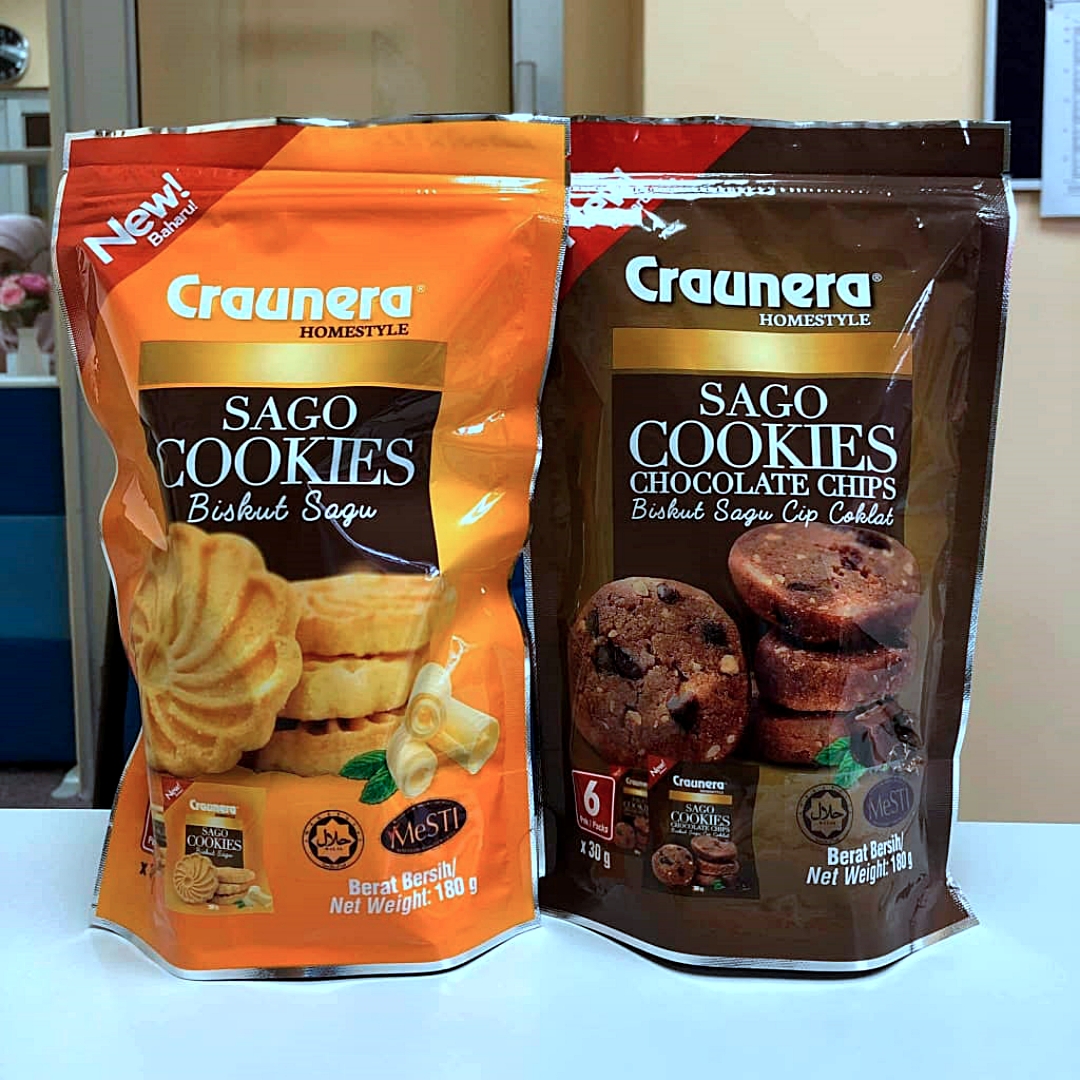