Photos that appear to show a Filipino doctor endorsing brands of mixed grains and nuts have been repeatedly shared in Facebook posts claiming the snacks are effective for weight loss. But the messages are a “scam” according to the doctor, whose photo has been doctored to look like she endorses the products. A Filipino nutrition expert told AFP that people who want to lose weight should adopt a healthy diet and lifestyle rather than consuming specific products.

A photo of Josephine Rojo, a doctor at a public hospital in the city of Bacolod in the central Philippines, appears to show her endorsing a brand of cereal called “MEZHOUSHIKE”.

The message – posted on a Facebook page on September 9 that bears Rojo’s name and image – states in part: “Last month I (sic) had the good fortune to attend a seminar on health and nutrition in Japan.

“Research shows that many people regain their slimmer figure and improve their health after eating this cereal for a period of time. Indeed, a perfect product.”

The post includes a link to an online store where people can apparently buy the product.

Another photo that appears to show Rojo promoting “Go Farm Super Meal Mixed Nuts” was shared on a Facebook page that also bears his name, as seen below: 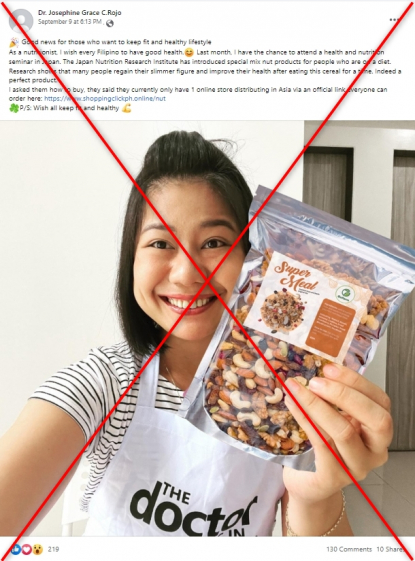 Similar posts were shared on Facebook here and here.

Feedback from some users has indicated that they believe the snacks are Rojo approved.

“Is it low carb and sugar free?” said another.

However, multiple keyword searches on the Philippine Food and Drug Administration website revealed that no such product had been approved for consumption in the Philippines as of September 30.

On September 12, Rojo denied endorsing the products in a post on his real Facebook page, which has more than 900,000 followers.

“Don’t get scammed by FAKE ACCOUNTS using my picture and name,” she wrote in part. “I promote the consumption of REAL FOODS such as eggs, meat, fish, vegetables.”

The Facebook pages that shared his fabricated mentions – which only have hundreds of followers – were created in June and August.

A closer look at their history revealed that their page names had been updated to use the Rojo name in September, as shown below:

Screenshots of the impersonating Facebook pages, which show that their names were changed in September 2022

A combination of keyword searches and reverse images revealed that Rojo’s original photo, in which she is holding a waffle, was posted to her Instagram account on January 13.

Below are screenshot comparisons of the doctored photos (left) and the original photo (right):

Responding to the bogus publications, Kenneth Mendoza, a researcher at the government’s Food and Nutrition Research Institute, told AFP: “Although cereals and nut mixes may contain dietary fiber and other minerals, there is no single food that can promote better health.

AFP has already debunked mentions of medical products made by Filipino doctors here, here and here.